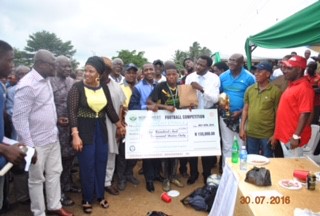 Malabar, October 1, 2016 – Northwest Petroleum has demonstrated her Corporate Social Responsibility objectives by sponsoring a community football competition in Cross River State. The football competition, the first of such, in Cross River State, kicked off in the Calabar Municipality. The soccer fiesta which will lasted for two weeks, featured ten teams within Calabar Municipality, among them: Ikot Ansa Rocks, Qua Rangers, Ikot Effanga United, Ishie Pillars, Eefut Strikers and Ediba Bombers.

The competition was sponsored by Northwest Petroleum in conjunction with the Calabar Municipal council, was aimed at promoting football at the grassroots and act as a talent hunt for Rovers FC and other clubs within the metropolis. The tournament ended on Saturday, July 30, 2016 at Ishie Maracana Arena with Ikot Effanga United as champions (after winning 5-3 on penalties) and winning a cash prize of N150, 000, while the second and third place winners won N100, 000 and N50, 000, respectively.

Chairman of Calabar Municipal Council and the initiator of the competition, Ntufam Donatus Etim, said: “I commend the Northwest Petroleum for the sponsorship of the tournament. It was conceived to sustain the bond of unity amongst the youths. It will also serve as a breeding ground for potential soccer stars while at the same time distracting idle youths from negative tendencies.” Commending the organisers of the competition, the Chairman, Cross River Sports Commission, Mr. Orok Duke, said: “It is interesting to see the private sector participating actively in sports development at the local level.” The sports commission chairman said he was optimistic the soccer fiesta will prove ample opportunity for budding football talents in the area to be discovered.

Representing the Managing Director and CEO of Northwest Petroleum – Mrs. Winifred Akpani at the finals event, Mr. Adedayo Adegun- Head Corporate Communications & Brand said this was another display of Northwest’s CSR commitment. When quizzed further about the sponsorship of the future editions, he noted that the company would study the effectiveness of the event before committing to future sponsorship. He commended the organizers for the planning of the event within a short period.